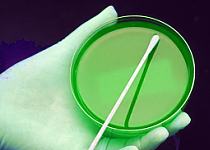 The Mayo Clinic3 estimated there were over 40 Million Americans suffering from chronic sinus infections and that 96 percent (38 Million) of these cases were caused by molds.

This year the Canadian Federal Ministry of Health4 has linked specific health related issues; especially Asthma-related symptoms to be connected to the exposure of molds and also links Mold to ODTS (Organic Dust Toxic Syndrome).

The CDC5 suggests people should take routine measures to prevent mold growth in the home and in commercial structures, usually by stopping the accumulation of moisture.

Individuals with immune suppression may be at increased risk for infection from molds. Anyone with these conditions should consult a qualified medical clinician.

What is Stachybotrys Chartarum?

Stachybotrys chartarum (also known as Stachybotrys atra) is a type of mold that has been associated with health effects in people. It is a greenish-black mold that can grow on materials with a high cellulose content - such as drywall sheet rock, dropped ceiling tiles, and wood - that become chronically moist or water-damaged, due to excessive humidity, water leaks, condensation, or flooding.

How can you tell if Stachybotrys Chartarum is present in your home?

Many molds are black in appearance but are not Stachybotrys. For example, the black mold commonly found between bathroom tiles is not Stachybotrys. Stachybotrys can be positively identified only by specially trained professionals (e.g., mycologists) through a microscopic exam.

How can Stachybotrys Chartarum affect your health?

Typically, indoor air levels of Stachybotrys are low; however, as with other types of mold, at higher levels health effects can occur. These include allergic rhinitis (cold-like symptoms), dermatitis (rashes), sinusitis, conjunctivitis, and aggravation of asthma. Some related symptoms are more general - such as inability to concentrate and fatigue. Usually, symptoms disappear after the contamination is removed.

Some insurance companies in Kansas are protecting themselves from black mold damage on your home.

Homeowners with Allstate Insurance may have received a letter that explains what the insurance company will and will not cover concerning mold. Allstate eliminated coverage for loss caused by mold, fungus, wet rot, dry rot and bacteria. Allstate Insurance Company says it's protecting its policyholders and itself from mold. In recent years, mold has cost insurance companies and homeowners billions of dollars, causing rates to shoot up and in some cases, more than a thousand percent.

Allstate says it has always excluded black mold itself as a cause of loss. The company wants to make the wording more clear because it has become such an issue the last few years.

Assistant state Insurance Commissioner Matt All says he doesn't want what happened in Texas to happen here in Kansas. Texas has the nation's highest average homeowners insurance premium, at over $850 a year. The Insurance Commissioner's office advises you to be vigilant when purchasing a homeowner's policy. Insist that an agent explain in detail what is and is not covered. If you're concerned about this problem, make sure you ask about it specifically. The department says if you have any concerns about your policy you can call them toll free at 1-800-432-2484.

All Sun Aire™ Products Are Proudly Made in the USA

“ We have used SUN AIRE purifiers in our Hilltop Nursing Center facility for the past five years. These units have safely and effectively been utilized to eliminate smoke from the designated smoking areas; remove airborne bacteria and viruses from the air; and also eliminate ammonia odors from the environment.”